This article may contain a little more chemical and biological terminology, but don’t let that distract you from understanding the process of fermentation in a Bokashi Organko. Let’s take a look at why some gardeners report about faster and lusher plant growth which they add fermented content and liquid from the Bokashi Organko. 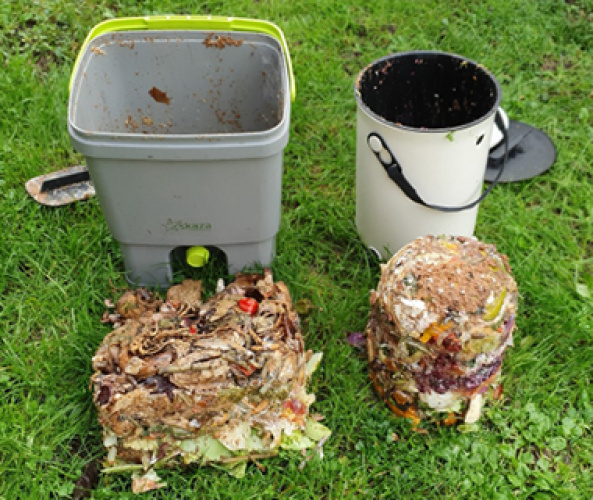 Fermentation is not the same as degradation

Fermentation in nature is not as common as degradation, where dead organic matter immediately starts to decompose and degrade. The best-known example is fermentation in the gastrointestinal tract of ruminants, e.g. cows, but this fermentation evolved as a need for degrading complex molecules such as cellulose.

Intentional fermentation activated by humans (most often in food storage practice - sauerkraut...) does not represent a rapid degradation of organic matter. Quite the opposite. It stops the degradation process and thus food is well preserved and stored. This is achieved through two main factors:

On the face of it, fermentation in the formation of compost and use in the garden does not look promising, as it "stores" organic matter. When the waste is placed in a closed bucket without oxygen and inoculated with bokashi bran, the process of fermentation of organic waste begins at temperatures from 15 to 37 ° C.

Waste fermentation and what is really happening

Beneficial anaerobic organisms bound to bokashi bran, which we added to the organic matter during the fermentation process, consume a very small percentage of the complex organic compounds in the organic material and energy to produce various compounds such as amino acids, organic acids (lactic acid, vinegar, butanoic acid), and biologically active compounds such as antibiotics, vitamins, enzymes, hormones. In the absence of oxygen, these substances stop the "normal" process of degradation/activity of microorganisms, and consequently also their own activity (the process is, therefore, self-limiting for them, lasting only to a certain extent). The material does not change much visually (only slightly softens), so we see the initial material and its shapes.

Because the process takes place in the absence of oxygen, there is minimal loss of carbon (C), oxygen (O), hydrogen (H) and nitrogen (N), or any other element, but their shape changes. Nitrogen, which is one of the most important elements for plant growth and development, is lost during composting, for example, as it evaporates into the atmosphere in the form of ammonia NH3. In the process of fermentation, organic nitrogen in the proteins of organic matter is converted into various amino acids, plant-available ammonium ion NH4 and even more important or useful for plants amino acid chelates.

What are amino acid chelates?

They are the formation of two amino acid molecules, between which a metal ion is attached - calcium (Ca), magnesium (Mg), iron (Fe), cobalt (Co), copper (Cu), zinc (Zn) or manganese (Mn). The ion in the center of the molecules is attached to amino acids with four strong chemical bonds, so it is protected as in a wrap and cannot be attached to other molecules, there are also no losses due to irrigation. It is an organic molecule that is easily absorbed by plants and thus also a microelement bound in the middle.

Absorption is easier because the molecule has no charge and thus passes through the cell walls faster. With their formation, in the process of fermentation, both nitrogen and microelements are stored, which the plant needs for healthy and successful growth. Once they get into the plant, it is easier to transport them to places where individual elements are needed.

In addition to making it easier for plants to absorb amino acids and much-needed metal ions, plants do not need to synthesize amino acids from NO3 or NH4, thus saving energy.

Compared to composting, fermentation preserves more elements, and at the same time "makes" them even more easily accessible to plants. In order to achieve the effect of better absorption of nutrients in practice, the fermented content must be emptied on the bed and covered with an additional layer of mulch (straw, leaves or compost) so that the plants send their roots to work.

Hey! We have an amazing educational e-book about Bokashi composting for you. Download it and find out everything you need to know about this sustainable solution, that will support your responsible way of handling bio-waste.

How to Use Bokashi liquid for plants?

Bokashi liquid overview and storage of this amazing juice

A simple guide to indoor composting with an urban composter

7 ways of how to use bokashi compost fermented mass