By their definition, polymers consist of a large number of repeating units. However, after adding certain supplements, they are no longer called polymers, but polymeric materials (plastic), which can be processed by various methods and are suitable for numerous products.

The first such plastics were produced in the late 19th and early 20th centuries. Since then, global plastic production has reached approximately 367 million tons yearly, with only a small portion of the plastic (2.1 million tons) representing bioplastics. Recently, however, the awareness about the finiteness of fossil resources, which are the primary source of plastics, is growing. Although it is still unclear at what point this would lead to an acute shortage, it is widely believed that this could happen within the next 50 years. Nevertheless, it will probably not happen because of the use of fossil resources for plastics and chemicals, but mainly because of their use for energy and transportation. 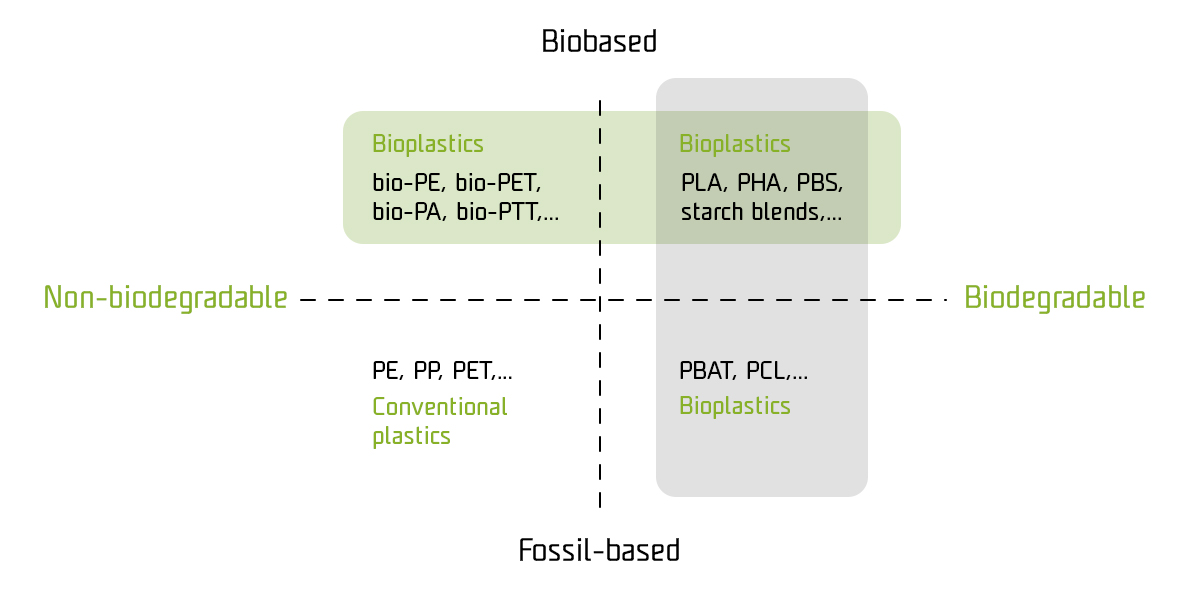 The most broadly used bioplastic classification differentiates between biobased and/or biodegradable. Depending on the biodegradability and biobased content, plastics can be divided into four groups:

According to this bioplastic classification, conventional plastics produced from monomer building blocks derived from natural resources are called drop-in plastics. They have the same properties as their fossil-based analog and can therefore directly replace conventional fossil-based plastic. The prefix bio- in this case only means that this plastic is biobased. On the other hand, polycaprolactone is produced from monomer building blocks derived from fossil resources and is biodegradable, even compostable. However, they are both called bioplastics.

A large group of materials belonging to the bioplastics group introduces a lot of confusion regarding the origin of the material and their decomposition. Therefore, it would be useful to consider a clearer or more detailed bioplastic classification in the future. The biodegradability and compostability of a material are completely independent of the origin of the material but depend solely on the chemical composition. The potential of bioplastic will definitely shape the future of the plastics industry.

Everything you need to know about bioplastic solutions